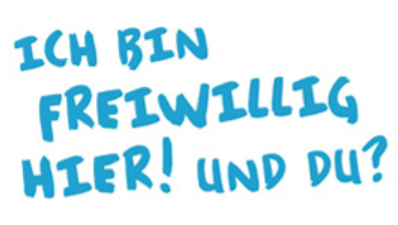 International Volunteer Day (IVD) mandated by the UN General Assembly, is held each year on 5 December. It is viewed as a unique chance for volunteers and organizations to celebrate their efforts, to share their values, and to promote their work among their communities, non-governmental organizations (NGOs), United Nations agencies, government authorities and the private sector.

Around 105,000 volunteers throughout Germany are involved each year in a Voluntary Social Year, Voluntary Ecological Year or a Federal Voluntary Service (BFD). The development volunteer service weltwärts was founded in 2008 by the German Federal Ministry for Economic Cooperation and Development (BMZ). Since then, more than 25,000 volunteers have been sent from Germany and dedicated themselves to development projects.

In order to get to their place of work, in Germany most volunteers use environmentally friendly means of transport such as buses and trains. In order to be able to make a lasting contribution to the society, volunteers are therefore dependent on public transport tickets that are as inexpensive as possible or even free of charge.

"We could show the volunteers with a free ticket for public transport that we appreciate their commitment and are grateful for their services," says IB President Petra Merkel. "The voluntary services are important educational and orientation times for young people and a special form of civic commitment," says Petra Merkel. "We must promote that by each possible support.

Today the volunteers advertise for the campaign "Free Public Transport for Volunteers" through a concerted action in the social media. The IB supports them thereby.

The German Federal Family Minister Dr. Franziska Giffey presented her concept for a "youth volunteer year" last year, which also included a subsidy for public transport. The early implementation of this concept would be desirable in terms of volunteers and strengthening social commitment. The IB will also support this project to the best of its ability.